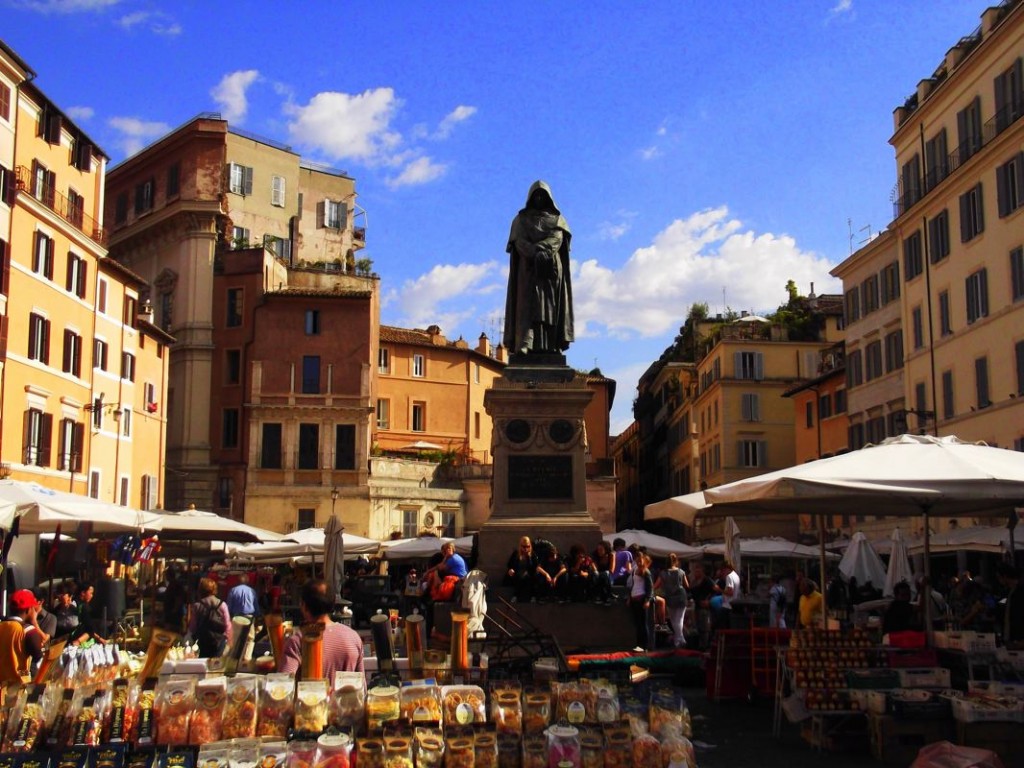 Campo Dei Fiori translates to “field of flowers” and in Ancient Rome, it remained as such due to constant flooding from the Tiber River. In fact, the first building to stand in the immediate vicinity was the church of Santa Brigada, which now faces the Piazza Farnese. The Orsini family, ( an Italian noble dynasty) established themselves here around the 13th century and with the development of their palace as well as the Palazzo della Cancelleria, Campo dei Fiori was paved and “field of flowers” was no longer an appropriate name. 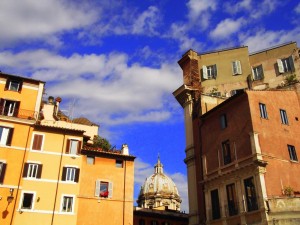 After the “field of flowers” was paved, the piazza became a public meeting point and a flourish of merchants came to the area to set up shop. If you look closely at the names of the streets surrounding the piazza, you will notice that they are named for various trades. Via dei Balestrari means street of cross-bow makers, Via dei Giubbonar means streets of 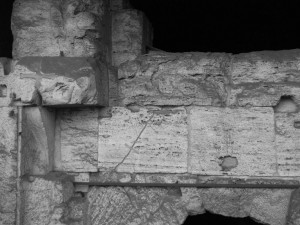 tailors and so on. The various merchants that came to the area made Campo Dei Fiori a popular place to meet with friends and get news as well as an arena for public events, such as executions. 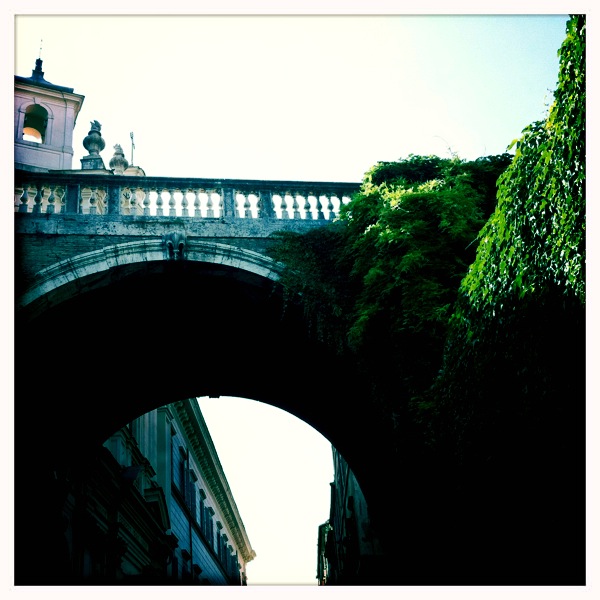 Campo dei Fiori played host to many public executions; the more famous of which was that of Giordano Bruno. Giordano Bruno was an Italian philosopher, astronomer, mathematician and Dominican friar who was burned alive in the square by the Roman Inquisition; for his ideas that were considered heresy by the Catholic Church. In 1887 after a newly united Italy was established, Ettore Ferrari built a monument to Giordano Bruno in the exact spot where he was burned alive. The statue faces the Vatican in a defiant gesture against the suppression of free speech.

Campo dei Fiori in modern times has not changed very much. The piazza during the day is a bustle of fishmongers, fruit/vegetable vendors and flower sellers but in the evening; the piazza transforms into a popular nightspot where college students hang out, old friends meet for a drink and lovers hold hands in the magical atmosphere that is Campo dei Fiori. 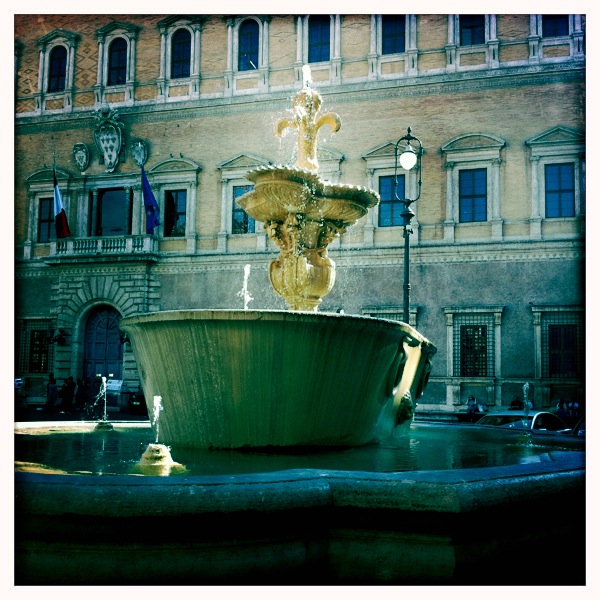 Even though Campo dei Fiori remained for the most part undeveloped until the 15th century, it still has a few historical attractions that must not be missed on your Roman vacation. Through vast development of the square, a part of what once was Campo dei Fiori is now referred to as Piazza Farnese so if you are looking on your map for these attractions, just remember that it is still the same area.

For instance, the Church of Santa Brigada that now faces the part of the square now called Piazza Farnese, is a beautiful sanctuary dedicated to Saint Bridget of Sweden. It was first built under the pontificate of Boniface IX(1389-1404), and through the centuries has had several significant changes. For example, in 1705 Andrea Fucina added a beautiful facade on top of which are several sculptures of St. Brigid and her daughter St. Catherine.

Palazzo Farnese, built by the Farnese family in 1517 dominates the piazza that was once considered part of Campo 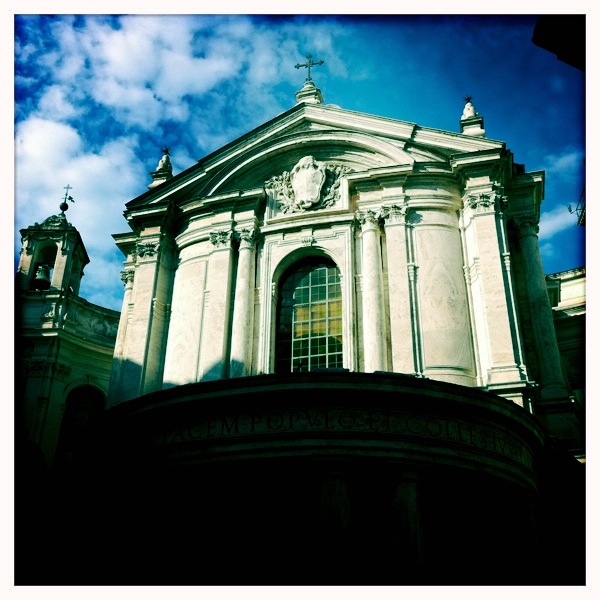 Dei Fiori. It stands a masterpiece to the Renaissance period and today houses the French embassy. After being built, the palazzo was later embellished by great artisans such as Sagnallo the Younger and Michaelangelo. A visit inside the beautiful palazzo should be planned well in advance as sometimes there is a waiting list a month long.

Donato Bramante is one of Italy’s heralded renaissance era architects and in Campo Dei Fiori you can find one his more famous works, The Tempietto. The famous Tempietto in the center the square of San Pietro in Montorio, stands as a monument to the martyring of St. Peter.

Campo dei Fiori offers a wide variety of nightlife as the piazza is a place where tourists, locals and college students congregate to drink and have a good time. The piazza is surrounded by cafes, restaurants and wine bars that offer outdoor seating for patrons to enjoy the electric atmosphere of the square. 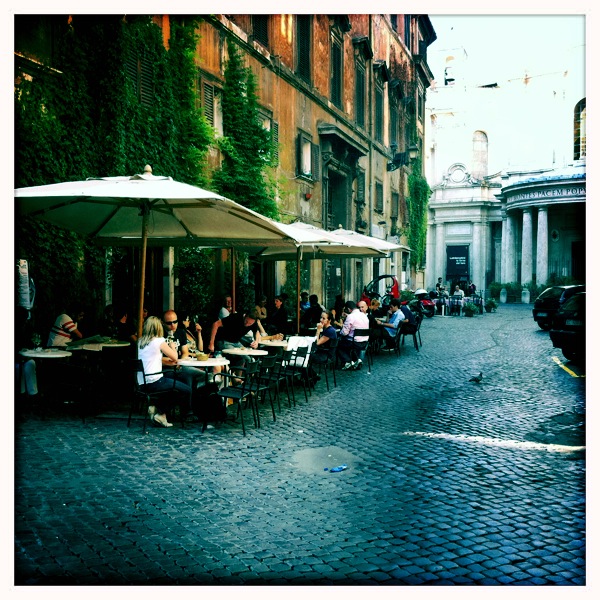 One such place to visit is Caffe della Pace or “The Peace Cafe”. It is located at Via della Pace 3/7 right in front of the Bramante Cluster. The Peace Cafe is a famous place where artists have come from all over the world to discuss various artistic endeavors since 1891. The interior is decorated in a traditional manner but The Peace Cafe also offers outdoor seating overlooking the Bramante Cluster. The Peace Cafe is a unique gem because of its location and lively artistic atmosphere. While the prices are moderately high, it is worth the trip for at least one drink and is a favorite of the locals.

If you consider yourself to be morea of a wine connoisseur; then Il Piccolo comes highly recommended. Il Piccolo has a wide variety of wines that can be expertly paired with it’s light menu. It is located at Via del Governo Vecchio, 74 and offers a more sophisticated atmosphere. Via del Governo Vecchio is a beautiful street in Rome surrounded by palaces with little shops and wineries that line its narrow path. If you are looking for a relaxing atmosphere to try some famous Italian wines, Il Piccolo is your best bet.

There are many pizzerias and restaurants located in Campo dei Fiori but there are only a few that are celebrated for the freshness and quality that Roman locals have come to expect. Here are just a few that locals favor and respect for their dedication to the Roman tradition of delicious Itaian cuisine. 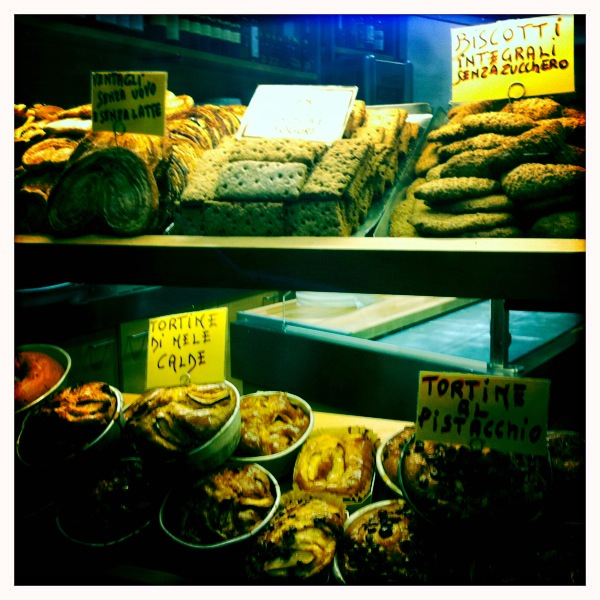 surprise. From the outside it doesn’t look like much but it is actually world renown for it’s thin crust, flavored with mozzarella and fresh basil at a great price. Pizzeria Baffetto has two locations but the one in Campo dei Fiori stands at Via del Governo Vecchio, 114. If you are shopping in the area, it is highly recommended that you stop by and try a slice. Be forewarned though that during the lunch hour there is usually a long line but if you have the time, it is definitely worth it.

Another restaurant that celebrates the tradition of delicious Italian food ( in more ways than one) is Antico Forno Roscioli. Antico Forno Roscioli has two locations, one is a bakery and another is a small grocery with a restaurant and wine bar on the lower level. At the bakery you will find fresh baked bread as well as pizza by the slice. The freshness of the bread coupled with the fresh pizza ingredients from all over Italy will make your mouth water. If you are looking for just a light snack the bakery is located at Via dei Chiavari, 34.

At Antico Forno Roscioli’s other location (Via dei Giubbonari, 21-23) you will find a more sophisticated selection of fine wines, cheeses, and cold cuts in the small grocery, as well as a wine bar and restaurant on the lower level. Here is where the magic happens as ingredients are gathered from all over the country to provide a diverse menu of traditional Roman cuisine in an contemporary atmosphere. The passion the owner has for fine wines dictates the selection of dishes provided; an expert pairing with every meal. Antico Forno Roscioli is a great way to spend an evening getting to know the best wines of the country. 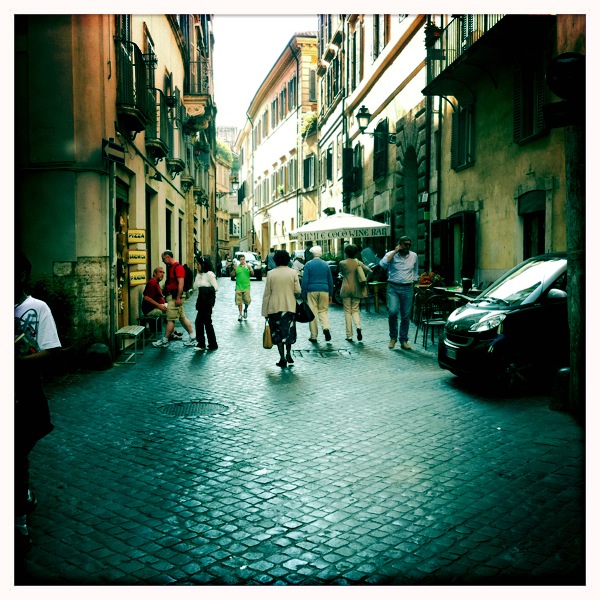 Campo dei Fiori offers a plethora of different restaurants, bars and shopping areas that will provide you with an authentic Roman experience. Be sure to check out the listings below for more choices that are favored by locals. As always be sure to bring a map as the cobblestone streets twist and turn and it is easy to get lost (especially at night). There are less pick pockets in this area but as always, don’t be careless and always be aware of your surroundings. Bars usually close around 2 a.m. but the piazzas are lively until early morning and it is a perfect place to spend a romantic evening with a loved one. Enjoy your stay and if you can, try and experience all that the lovely Campo dei Fiori has to offer.